The arrival of Cupra born has meant putting on the market an alternative that takes an already known proposal, such as the Volkswagen ID.3, and gives it a spin with a different aspect that seeks to attract a type of customer that until now was not very inclined to electrification. A model of which we will review its most important points.

CUPRA has gone from being a denomination of the sportiest versions of SEAT, to becoming a own brand in which the German group has placed many of its hopes. A global name that has its first proposal in the Born in the electric car sector.

It is, as we have said, a direct variant of the Volkswagen ID.3, with which it shares the MEB modular platform, is presented as a compact (segment C) with a more dynamic cut than its German cousin, as demonstrated by both its muscular design (thanks to the use of specific bumpers it measures 4.32 meters long, 6 cm more than ID.3) as its mechanical range.

The front of the CUPRA Born boasts torn full LED optics and a huge lower air intake (whose surface is mostly blinded) that gives it a very sporty touch. Although in the side view it cannot hide its kinship with the Volkswagen ID.3, it stands out from it by using a floating C-pillar and specific wheels (between 18 and 20 inches).

But in addition to the visual aspect, the group has worked on this model so that this Take advantage of the months of difference in its launch compared to the ID.3. A time where more aspects such as the passenger compartment have worked, which transmits a more luxurious and better finished image than that of the VolkswagenAlthough elements such as the 5.3-inch digital instrumentation are maintained, most parts are specific; without going further, the steering wheel will have a sportier design and it will include two buttons to have direct access to the driving modes. Something to keep in mind if we also add that we are talking about two models that in their access version, in the case of the Cupra at the moment only the 58 kWh version, have practically the same price. From 38,610 euros for the Born for the 37.965 of the ID.3 Pro.

The entire upper plate of the CUPRA Born is made of padded plastic, while the center console is raised and has decorative inserts not present in the Volkswagen. The 12-inch touchscreen is specific (in the ID.3 it is 10 inches), and the Head-up Display with augmented reality seen in other electric Volkswagen Group.

Bucket seats with integrated headrests will add an extra touch racing to the cabin, while the upholstery will be made with recycled marine plastics. As happens on the outside, inside there will also be a great profusion of copper-colored moldings, the corporate tone of the Barcelona brand.

Later we will see the arrival of a more powerful version with more battery capacity, which can be configured with the e-Boost1 pack, which takes the power to the 231 hp powered by a battery 77 kWh with which autonomy is situated in the 540 kilometers WLTP and acceleration from 0 to 100 km / h in 6.6 seconds.

The 10 keys to the new CUPRA Born 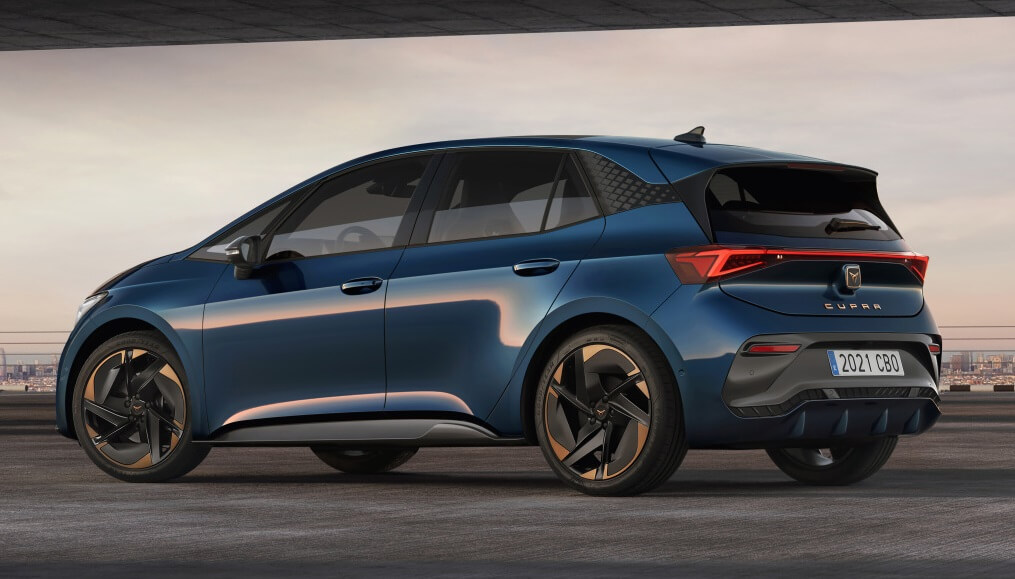 Cupra Formentor VZ5: the keys to the new sports SUV