Peugeot’s range of SUV-type vehicles could integrate a new model that would respond to the name of 1008, a car that should be cheaper than the current 2008 and 3008.

The “boom” of SUVs seems to continue in the short and medium-term, so it is not surprising that the different car manufacturers strive to launch the most innovative and suggestive models. In this case, the protagonist is Peugeot, which could expand its range of models with this type of bodywork in the coming years. The next code name? Peugeot 1008.

This new Peugeot 1008 would be ready to be marketed within three years, in 2025. In the range of the manufacturer of the lion’s signature, it would be placed at the base of the entire commercial offer of SUV vehicles, so its size will be the smallest of all the models and its price will also be the cheapest, with a much more adjusted rate than its “older brothers”: 2008 and 3008.

The Peugeot 1008 2025, in addition to being the smallest SUV in the range of the French brand, also has the potential to become the vehicle with the most contained dimensions, since it could also replace the recently disappeared Peugeot 108.

Regarding the design that this new small SUV could adopt, everything indicates that it will adopt most of the design features already seen in the latest launches of the French company. In this way, the new logo of the lion signature will be well present on its exterior, an emblem released for the first time by the new generation of the 308. The style of the front grille of 1008 2025 should have shapes similar to those of the 2008 and 3008, while the headlights should also adopt a physiognomy very similar to that of “its older brothers”.

It is not the first time that the French brand has dabbled with a vehicle with a very small size SUV/crossover body. In 2010, Peugeot presented the HR-1 concept and in 2017 and 2018 it was found that the firm had not ruled out the project to manufacture and market a “mini-SUV”.

As several French media unofficially point out, the technical platform from which the next 1008 2025 would start would be broadly the same CMP architecture that specifically mounts the Citroën C3 developed expressly for the Indian and South American markets. . Thus, the outgoing production vehicle should measure between 4 and 4.15 m in length.

As for engines, everything indicates that the next Peugeot 1008 2025 may adopt a new version of the 1.2 PureTech gasoline engine (accompanied, perhaps, by a 48V micro-hybrid system) and, more focused on the European market, a version purely electric that should respond to the name of e-1008.

This unprecedented Peugeot 1008 will be a completely different vehicle from 1007 that the French firm marketed between 2004 and 2009, a model that is also small in size but with the shape of a minivan. 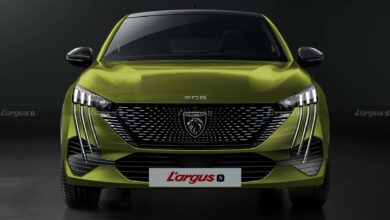